Five Tips To Care For Your Plants This Summer 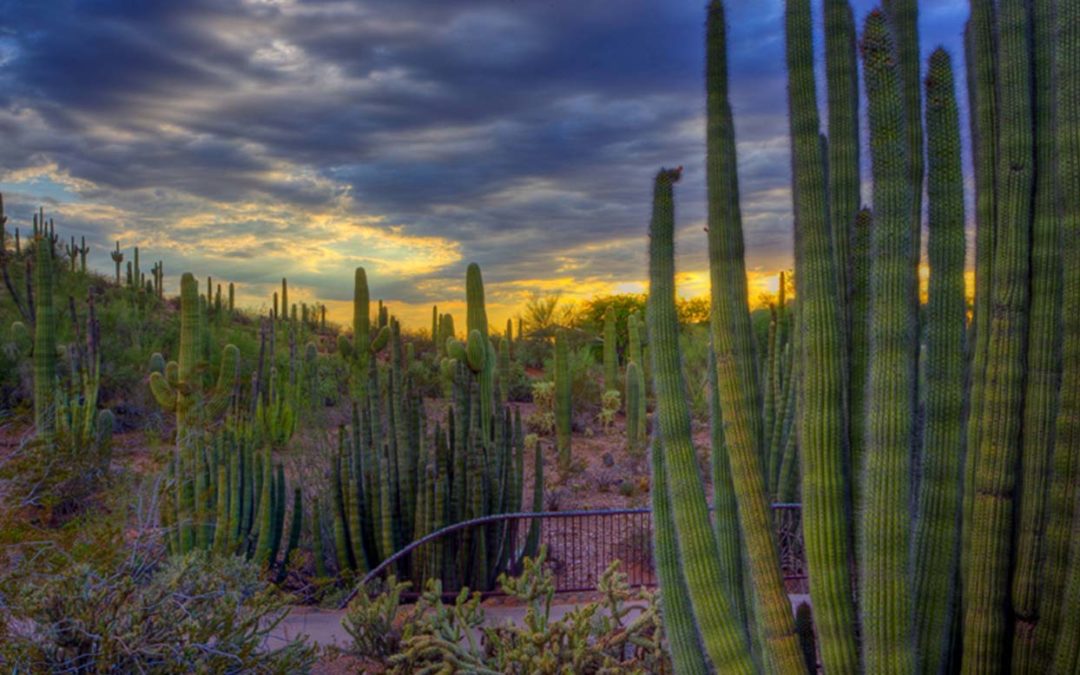 Monsoon season is approaching in the Valley. Learn how to care for your plants and garden with these helpful tips from the Garden’s Horticulture department.

Shade protection may be necessary for many plants, including cactus, agaves and other succulents. Even vegetables like tomatoes, bell and chili peppers will need to be shaded. Shade cloth can be purchased at your local nursery. Shade cloth rated between 30% to 60% works best. Keep the shade cloth on your plants for the duration of summer. 2. Look for Signs of Water Stress

Look for signs of water stress in plants regularly. Some signs to look for include wilting, curling or dull-looking leaves; yellowing or falling of older leaves; wrinkling of leaves and stems (succulents); and dead stems or branches. If it rains, turn off your irrigation system and let nature do its work to provide water to your plants.

Lightly prune native and desert-adapted trees to avoid branch breakage during the monsoon season, if needed. Do not prune excessively because doing so will expose the tree trunk to the blazing sun, causing it to sunburn. Never remove more than 25% of the canopy in a year.

Desert trees can fall over during the monsoon season. This often occurs due to root defects and improper watering. To keep your trees healthy and prevent this from happening — at planting time — check the tree’s roots. If you see any circling or girdling roots, prune them before planting. Although this will stress the tree for the short term, the long-term investment will be a healthy rooted tree. Deep watering is also encouraged for trees to develop a strong root system that will keep the tree in place.

The large, black-brown beetle bumbling onto your porch during the sweltering summer monsoon nights is the palo verde beetle.  It has just emerged from its subterranean home looking for a mate.  For the past two to four years, it has lived underground as a grub or larva feeding on the roots of many native and non-native plants, not just palo verde trees.  When the grubs become adults, they will ascend and can be seen particularly after rainfall. Once the female adults mate, they lay their eggs and die soon after making their life span about one month. Using pesticides is not recommended as the beetle is already gone by the time you notice any damage. To prevent root borers, keep your plants healthy as possible as they will be less vulnerable to an attack. There are many natural predators of the adult beetle including roadrunners, coyotes, owls and even bobcats.

Large, green caterpillars may be appearing on tomatoes, eggplant and even the sacred datura (Datura wrightii). They can either be the tobacco or tomato hornworm feeding on the leaves, flowers and stems. After three to four weeks of feeding, the larva will burrow into the soil to pupate. In about two months, the large adult moth will appear and are often mistaken as hummingbirds. These moths are important pollinators for many nighttime flowering plants including the sacred datura (Datura wrightii), fragrant evening primrose (Oenothera caespitosa) and the queen of the night (Peniocereus greggii). No method to control is necessary. If infestation is high, hand-pick caterpillars off your plants or allow naturally occurring parasites to help control the population. 
Plants and People of the Sonoran Desert Trail closed through Oct.
ADVANCE TICKET RESERVATIONS ARE REQUIRED FOR MEMBERS & GENERAL ADMISSION.